LIGHT UNTO THE NATIONS 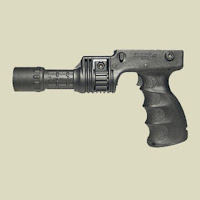 What is it? It doesn't seem to be a bird. Definitely not a plane. It's...an Israeli Defense Forces flashlight. For only 72 bucks plus shipping and handling, you can own this Agronomic [sic.] Flashlight Grip (T-GRIP) Tactile Vertical Foregrip Weapon Lights Holder.

It "comes with a 1 inch flight Adaptor with special activity trigger, and also a place to store additional batteries, AND
* Three in one: special handgrip and a flashlight mount with a built in trigger that
* transform tactical light into a Vertical Fore grip Weapon Light
* This unique ergonomic fore grip will fit perfectly to your hand while holding in up to 1 .
* diameter tactical light with Tail cap switch and allow trigger activation of the light
* Ergonomic designed grip, comfortable and natural to use “fighting stance".
* Designed to hold any 1" diameter flashlight and allow quick and easy operation
* Easy to fit and secured by 2 bolts
* Fits hand guards equipped with a Weaver or Picatinny rail system
* No gunsmithing is required
* Molded from reinforced polymer composite
* Super lightweight, Eliminate the need for a ymer compositer"

Now, I don't normally use my blog entries to sell Israeli military accessories, but this piece of equipment serves up much food for thought. As does the website on which you'll find it (search "flashlight""), the Israel Military Products Israeli Army Surplus Store, http://www.israelmilitary.com/default.aspx.

I advise you to explore this site, watch the short slide show on the home page, and sift through the various gifts for sale. You don't have to be Jewish. Two of my favorite items are a sweatshirt reading " America Don't Worry. Israel Is Behind You." and a hoodie, reading "UZI DOES IT". With a nice Uzi graphic.

I was brought inadvertently to this page by my novelist's wondering about the details involved in a terse dispatch this week from the Palestinian Popular Committee Against the Wall and Settlements:

The Israeli army and police occupation forces stormed the village of Bil’in at 1:30 am on Monday 4th April, raiding the houses of Ali Ibrahim Bornat, and Khames Abo Rahma. They searched their houses and tampered with the contents under the pretext of search for solidarity foreigners.

Bil'in is a village of 1,800 people in the central West Bank, near Ramallah. It is famous for its six-plus years of weekly, non-violent protests against the illegal (International Court of Justice) wall separating it from 60% of its farmland, and its peaceful protests have been met with increasing Israeli violence, now including live ammunition, and my favorite, Israeli trucks spraying human sewage collected from Modi'in Illit, an illegal Israeli settlement of 50,000, towering on the hill above.

Now, imagine this closely. You're asleep in your bed. It's still very dark. Into your tiny town roar not one, but two heavily armed convoys -- one from the military, one from the police. Doors, as normal, are banged on, kicked in with shouts and threats, children cry in fear. Flashlights -- likely those lovely "agronomic" ones, used in "fighting stance" -- search the rooms, peer into faces, blind the eyes.

What are they looking for? Weapons? Terrorists? No. Non-violent activists, organizers of the weekly protests, and worst of all "solidarity foreigners" -- those peaceniks from abroad who come to witness, document, take part in peaceful demonstrations against the wall or home demolitions, occasionally help with harvests.

I suppose it could be worse. Rachel Corrie experienced being on the wrong end of a Military Bulldozer, and others have been blinded, brain-damaged, and killed by "non-lethal" weapons shot directly at their heads for their non-violent protest.

Nevertheless -- harboring peace activists, are you? Take that, and that, and we're really sorry about the door and that laptop. See you soon.

"I, the LORD, have called thee in righteousness, and will hold thy hand, and will keep thee, and will make you a covenant of the people, as a light unto the nations." (Isaiah 42:6)

There are extra batteries in the T-GRIP storage compartment.
Posted by Marc Estrin at 4:19 PM 1 comment:

KEEP YOUR EYE ON THE PEA

PEA OF THE MONTH:

First The Holy Trinity spoke only of imposing a no-fly zone. That -- and "all necessary measures" -- code for military action -- to protect innocent civilians against Gaddafi's forces.

It's widely understood that "a no-fly zone" is most often the first step towards broader military engagement, and adding the UN license for unlimited military escalation was crucial to getting the U.S. on board. The "all necessary measures" language also appears to be the primary reason five Security Council members abstained. For Russia, China, Germany, India and Brazil, that phrase meant giving the Pentagon and NATO a blank check backed by UN legitimacy.

Some supporters of the resolution insisted on explicitly excluding a "foreign occupation force." But any U.S., British, or French troops arriving in Libya could easily be disguised as an "assistance team" or "training mission" or any diplomatic pseudonym.

After getting support from international bodies on that understanding the Trinity immediately began to wage war against Libyan military forces, and whoever was nearby, a level of direct U.S., British, French, NATO and other international military intervention which went far beyond the "no-fly zone but no foreign intervention" that the rebels wanted, escalating the militarization of the entire region and internationalizing the military battle.

In yet another breach of international law, the president announced an “Obama doctrine” – an approach to situations where US action is not imperative but desirable, in concert with the international community.

Then, to smear the blame, he shifted command of the no fly zone over to NATO --- a front for US military control -- itself commanded by US admiral James Stavridis.
The claim is that UN Resolution 1973 "allows everything except boots on the ground."

So why are twenty-two hundred Marines and sailors from Camp Lejeune preparing to deploy off the coast of Libya? And who in Libya is gathering intelligence to call in all the air strikes? Those CIA trainers on the ground probably wear boots.

And who are the rebels we are supporting at the current cost of $100 million/day? It seems that the newly denominated rebel leader, Khalifa Hifter, has spent the last 20 years living just outside Washington, ten minutes from Langley, and with no clear means of support.

NATO, btw, may order ground forces into Libya, Adm. James Stavridis admits. He recently told Congress that "while allied forces were not yet considering the deployment of troops on the ground in Libya, it was a possibility."

Some have termed this mission creep. To me, it seems more like mission bait and switch.

If one follows the money flow, the great American game is surely no longer baseball, but rather Bait 'n Switch. Americans, for all their smarts around sports, are mindless suckers for various shell and pea games, in which they are always the victims.
Some peas begin with Ps -- protect, preserve -- others don't -- terrorism,and defense, for example. Oh, here's a good one: petroleum. When a P-word is mentioned, we seem to shift instantly from cognitive to limbic thinking.

Jon Stewart, though of somewhat suspicious politics, ran a segment which hilariously captures this behavior. His P-word is "squirrel":(Begin at 4.00 minutes, and watch to the end (another 4 min) . Sorry, I don't know how to capture only the relevant part of a YouTube video):

What is one face of squirrel for us? The immediate equating of intervention with military intervention. We've got the biggest, most expensive hammer, so  why diddle around? The UN resolution calls for an immediate ceasefire, for negotiations to reduce rather than escalate the level of bloodshed, – all sidelined or ignored as soon as direct military engagement was on the table. And for us, it would have to be on the table before we'd agree to play. "All necessary measures." And now, of course, it’s too late.

I thought you might like to see it in action. A quite cool piece of street con. Here it is in its pure form. You might want to turn the sound off to better concentrate.

Slick, huh? What's at play here is pure technique, leaving out the most obvious dimension of baiting. Here it is in street context:

You'll notice the strong possibility that there is more than one perp. Given the particular surroundings, the may even be more. The TOSSER challenges the PLAYER to bet, say $20 on guessing which shell the pea is under. The first to volunteer is the SCHILL -- and by God, he wins, and the TOSSER actually pays up, saying that one was too easy, and he will make the next one harder. "Harder?" an interested sucker in the audience thinks. "Maybe I should hold off to see what harder is." So he does, giving SCHILL #2 a chance to bet. And he also find the pea, and now the sucker PLAYER (who had guessed right, too), goes for it -- maybe is allowed to win one -- and the psychology cascades from there. The dream team may also include a LOOKOUT, depending on the place.

Want to see how the trick is done? I thought so:

The above is not simply infotainment,  but will serve as an angle for analysis.

As the tosser does not invite people to be stung, the first thing Obama does not do is say "I am taking the country  into yet another war."  No, we are not at war. The Obama administration prefers the term "kinetic military action"" Bait 'n switch: No war? Sure, let's go. Protect the People from  a dictator's terrorism.

Our goal is not "regime change", but on the other hand, we wouldn't be unhappy to see Ghadaffi go (wink, wink, nudge, nudge).

Obama: "To brush aside America's responsibility as a leader and -- more profoundly -- our responsibilities to our fellow human beings under such circumstances would have been a betrayal of who we are. Some nations may be able to turn a blind eye to atrocities in other countries. The United States of America is different. And as president, I refused to wait for the images of slaughter and mass graves before taking action."

Damn. Left out the mushroom cloud. But still, "Squirrel!" enough.

This from the Great Moral Leader who every day murders civilians in Afghanistan and Pakistan and Yemen and Somalia, and now Libya,  but who turns a blind eye when "the great democracy in the Middle East," Israel, murders ever more Palestinians and our sonsa bitches exercise population control in Algeria, Tunisia, the Emirates, and above all, Saudi Arabia.

Operation Odyssey Dawn, the current name of the game in this Culture of Deception and the Strategy of Imposture. Obama the TOSSER; NATO, and arm-twisted countries of the Security Council; The European Union, the endorsing SHILLS; the mainstream media, the LOOKOUT. What an all-star cast for a heavy-duty con game.

What would a clear eye connected to a sense of history discern?

That the deadly goal of this charade is to assert Western control over the Arab rebellion, to slow them down, channel them, coopt them, confiscating their spontaneity,  preventing these popular movements from changing the basic political realities in the middle east, and in the best case, restoring the statue quo ante.

If George W looked too scary, we'll give you the more user-friendly Obama to pursue and escalate the same goals.  If another mideastern war seems too scary, let's identify another Hitler (cf. Saddam) and begin a kinetic military action, not to replace him, of course, but to protect the innocent uprising of democracy.