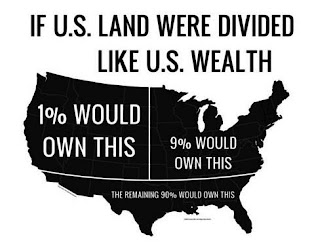 I've thought from the beginning  that "1%" was an awfully generous characterization of our current economic pathology. The above graphic illustrates this well.

Given our ubiquitous 1% slogan, I'd say the unfingered 9% are getting off pretty easy, skulking innocently to the bank.

The issue is not particular folks lazing on their yachts or flying high in their corporate jets. The issue is the SYSTEM they have created, an on-going updraft for wealth and power, financial, political, military, media. It is represented not by a number -- and 1% is far too small a number -- but by a direction. And that direction leads not just toward the obvious penthouses and mansions, but to many less obvious locations. In the shadow of billionaires, are multimillionaires off the hook? Mere millionaires? Those making $440,000/year -- ten times the US median income?

It's too late to change a slogan which has become iconic. But let's at least see it as a metaphor for the actual injustices built into our system, and capitalism in general.

Marc Estrin
Posted by Marc Estrin at 6:24 AM No comments: 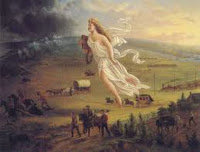 For the last several Sundays, there has been verbal violence, and today, almost physical violence between the Occupy Burlington crowd, and those in City Hall park before the OB crowd arrives.

People, some homeless, some drunk, some just hanging, are sitting at the chess tables, around the fountain, and on neighboring benches when several hundred OBers march into what has previously been their space -- as if they, the marchers, owned it. Any peace and quiet they had been having, any fellowship with others in situations similar to their own, is over, and now they are unwanted, unwanting guests at someone else's party.

Often there is obscene yelling in disagreement with what they are hearing at the people's mike. Signs are torn up. Someone twice tried to jump through a Bread & Puppet INSURRECTION banner, ripping it down.

Small skirmishes occur, with face offs and threats. Claims of "I am homeless, are you?" are met with invitations to go up and say "Mic check," and then to phrase their passionate observations in two-beat phrases. "You're free to speak, too." "Yeah? Fuck you!"

What I'm describing is an occupation different than what most of us think we're doing, an occupation more like that of Palestine than that of Wall Street. What are our assumptions about claiming the park whenever and however we will? What happens to the natives when the Occupy Burlington troops roll in? And how will this situation develop or devolve in the future, if City Hall Park becomes full-time occupied, and the homeless and other chronic park-dwellers become strangers in their own land?

I suggest we be aware of this issue.
Posted by Marc Estrin at 7:15 PM 2 comments: