ROOSTING WITH THE GODS 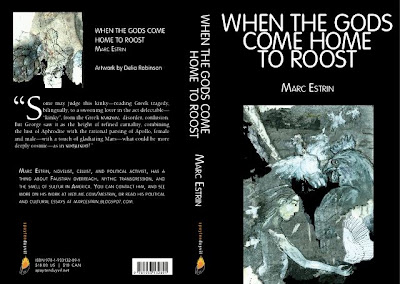 I'm not sure if announcing the release of one's latest novel gets this post into the "shameless commerce division", but I do think people who like my writing may be interested.

When the Gods Come Home to Roost has just been published by Spuyten Duyvil, a wonderful small publisher that produces gorgeously made books. (They did my last one, Tsim-tsum.)

When his 35-year old trophy girlfriend, Demi, dumps 65-year old George, a classicist at Berkeley, he decides to attempt to actualize some of the Greek and Roman myths he has been teaching for four decades, specifically the one in which Aphrodite transforms Phaon from an ugly old man into a beautiful youth.

He accepts the (mephistophelian) offer from a plastic surgeon in his UU congregation to turn him into a genuine 17-year old through a combination of surgery, hormonal therapy, nutritional therapy, psychotherapy and yogic practice. The rejuvenation succeeds, and for the acid test, George enrolls at The Putney School, the high school attended by Zoe, Demi’s daughter, a young woman he had raised to be the daughter he always wanted. They fall in love — as well they might, being so perfectly matched in worldview, frames of reference, and jokes.

The moral status of this relationship is challenging. George, after all, has been changed. He is really 17, not her erstwhile stepfather, but an appropriate, non-blood related, first lover. But maybe he’s not really 17. You get the issue. Lots of interesting classics and music stuff on the path. A plastic surgeon you wouldn’t want to meet in a dark alley.

Gods was born in this wise:

The first seed was planted by a Harpers magazine article quite a few years back which struck me with its beautiful and alarming illustrations. It concerned a plastic surgeon who thought that medical ethics should not exclude individual patients' desires to express themselves through bodily transformation. Faustian striving and overreach has been a continual theme in my novels, and here was a great set of possibilities for crime and punishment. I tucked it away somewhere in my subconscious.

The next poke came a few years ago, when I was reading in bed, holding up a book, and noticed the skin on my arm was wrinkled. First time I had noticed. Geez, I'm getting old.

Putting those two together a year or so later, the story emerged of a guy getting old who meets up with a plastic surgeon ethically capable of anything -- and there you have it: Faustian striving, mephistophelian manipulation, and whatever consequences might result therefrom.

The most interesting thing, as always, is that novels never work out the way you think they're going to. Plots fulfill themselves, characters enter and exit unexpectedly, and tell you what to do. I am not the only writer who has experienced this. In my case, the unexpected banana peel was the happy end. Well, maybe not entirely happy, and certainly not securely happy, but happy–ish nevertheless.

I had always been a fervent fan of Marlow's Faust, and Thomas Mann's, as opposed to Goethe's. Why the hell should Faust get off so easy? Away to hell with him. A deal's a deal. No salvation for unknown causes.

And yet, here I have my Faust (George Helmstetter was the original Dr. Faust's real name) undertaking a deal with the devil, getting his unholy goodies, and walking off with his Gretchen into the sunset. Why can't I control these things?

The other interesting switcheroo was discovering that Mephistopheles himself has quite Faustian qualities, always striving for greater agency and control, his own demon being, perhaps, the once-innocent John Stuart Mill. You just never can tell.

I do finally have to say that the last thing on earth I, Marc Estrin, would want, is to do it (or anything) all over again.

Here's the book at Amazon. If you like it (or hate it) put up an Amazon review.

Marc
Posted by Marc Estrin at 5:10 AM No comments: